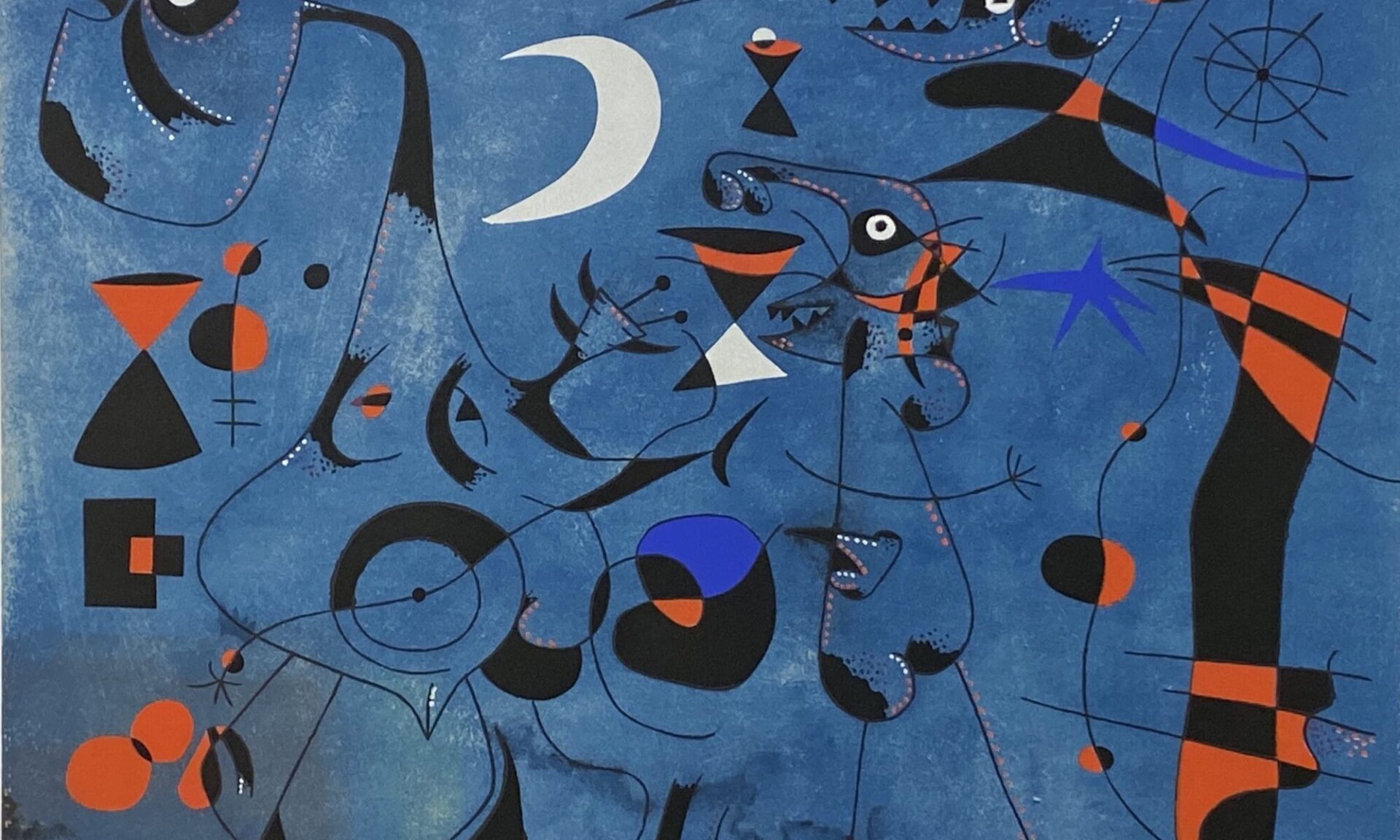 Joan Miró’s painting The Hunter (Catalan Landscape) brings together the real and the imaginary, abstraction and figuration, and image and text in a way that would characterize much of his work to come. In the canvas—a landscape filled with personal symbols and evocations of life on his family’s farm in Montroig, Spain, such as a tree trunk sprouting a leaf and the eponymous hunter carrying a freshly killed rabbit—he rendered the everydayness of the farm with a poetic intensity. This impetus to reveal the marvelous in the quotidian attracted the attention of André Breton, the founder of Surrealism, who acquired The Hunter in 1925. Breton would later deem Miró’s arrival in Paris in the early 1920s “an important stage in the development of surrealist art.” 1 Indeed Miró’s studio in Paris soon became an “avant-garde laboratory”2 and gathering place for artists and writers, including André Masson (whose studio adjoined Miró’s), Antonin Artaud, and Robert Desnos.

According to Breton, the Surrealists sought to liberate “the real functioning of the mind” through “a pure psychic automatism,” free of “any control exercised by reason.”3 Their approach to art making, as defined by Breton, inspired Miró. He later recounted, “Rather than setting out to paint something, I begin painting and as I paint the picture begins to assert itself….,The first stage is free, unconscious.” But, he continued, “The second stage is carefully calculated.”4 The Birth of the World reflects this blend of spontaneity and deliberation. Although its brushy, atmospheric background was freely applied, the individual motifs and their arrangement were sketched out in advance. In this and many of his following works, Miró attempted to give free rein to the unconscious, as the Surrealists did, at the same time as he sought to formulate a new pictorial language.

Beginning in the late 1920s, Miró embarked on a period of experimentation with mediums and techniques, attacking the limits of painting in order to reinvigorate it. He successively made works on unprimed canvases, white grounds, flocked paper, cardboard, Masonite, and copper; collages, paintings based on collage, and so-called “drawing collages”; and constructions and objects. These experiments also included engagements with art history and with language. In Dutch Interior (I), part of a series based on 17th-century Dutch genre paintings, Miró reimagined illusionistic space, compressing and flattening the scene of the original painting into planes of non-naturalistic, unmodulated color. Later, the aerial, calligraphic “Hirondelle Amour” exemplified his peinture-poésie, or painting-poetry, as biomorphic forms and words seem to float in suspension above a blue expanse.

Still Life with Old Shoe brought an end to an intense, decade-long period of experimentation, as Miró announced his intention to do “something absolutely different.”5 The canvas, which he painted in Paris as the Spanish Civil War raged in his home country, marked his temporary return to working from life. It straddles the line between still life and landscape, even as the saturated, acidic colors and disproportionately scaled objects undermine its title’s—and Miró’s—proclaimed adherence to reality.

By 1939, World War II had come to the European continent. In this climate of danger and human catastrophe, Miró created the Constellations, a series of 23 gouaches on paper, including The Escape Ladder, which gave form to the transcendence and escape he longed for during those years. Interweaving his distinctive visual vocabulary with cosmic and earthly themes, these intimately sized works were easily transportable. In flight from the German invasion, he carried the earliest gouaches in the series, begun in France, back with him to the relative safety of Spain. Breton would later reflect that “Miró, at this hour of extreme anguish unfurl[ed] the full range of his voice,” sounding the same “note of wild defiance of the hunter expressed by the grouse’s love song.”6 After the war, Miró gained international recognition as he continued to experiment freely with different mediums, including ceramics, printmaking, book illustration, and sculpture.