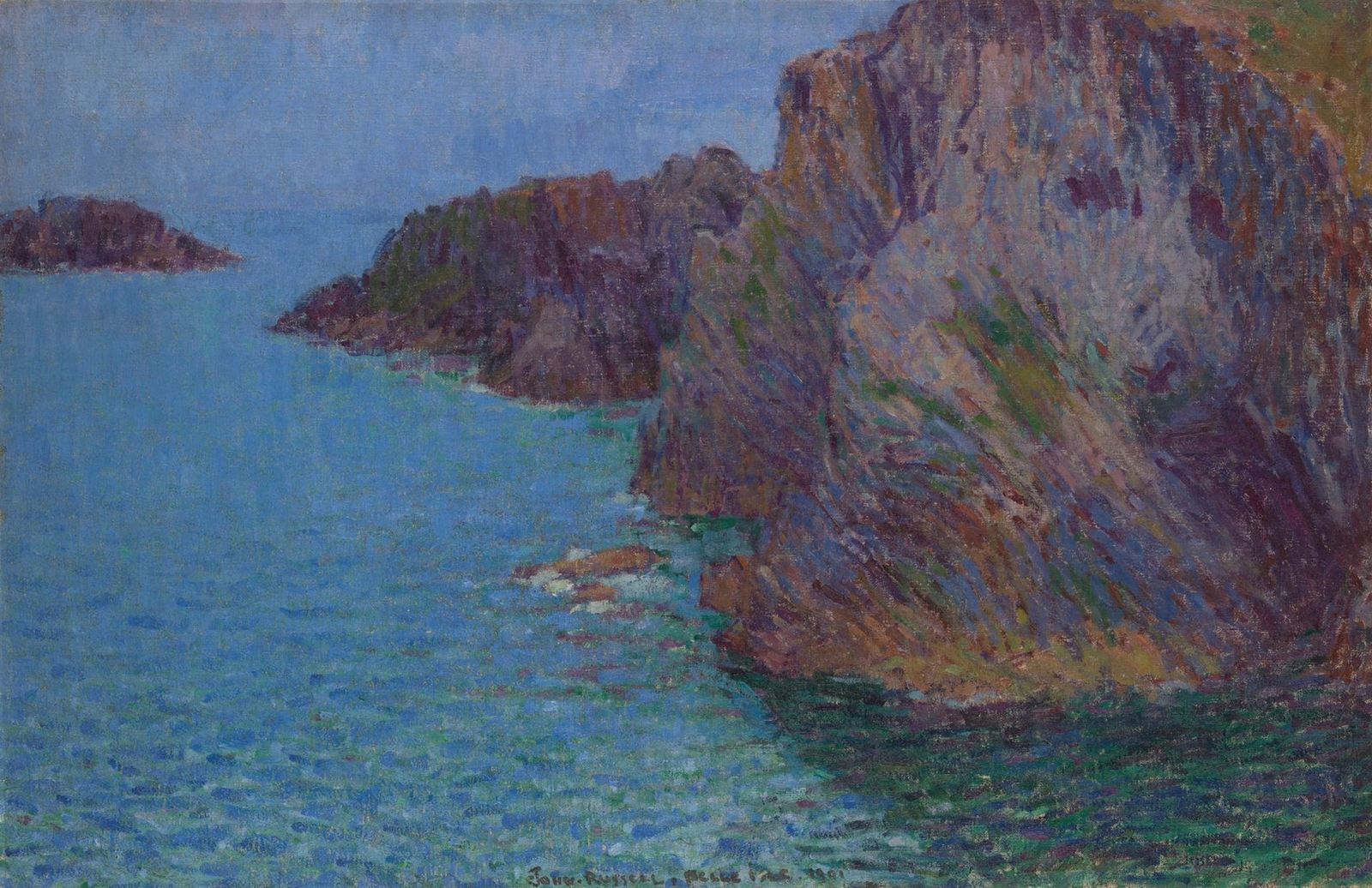 John Peter Russell (1858-1930), artist, was born on 16 June 1858 at Darlinghurst, Sydney, eldest of four children of John Russell, Scottish engineer, and his wife Charlotte Elizabeth, née Nicholl, a Londoner. His father had migrated as a boy and was a partner in his brother's engineering firm, (Sir) P. N. Russell & Co. John Peter was educated with his brother Percy (later an architect) at The Goulburn School, Garroorigang. From 18 he trained as a 'gentleman apprentice' with the engineering firm, Robey & Co., Lincoln, England, where he became a qualified engineer (later he was able to cast the keel of his yacht himself at Belle Ile). He maintained his childhood interest in art and made his first experiments with water-colour, delineating the Gothic outlines of Lincoln Cathedral in a misty light.

In 1877 John Russell wound up the ailing Sydney engineering works. He died suddenly in 1879: John Peter found himself with substantial means and freedom to choose his own career. After twelve months in Sydney to sort out his affairs, he enrolled at the Slade School of Fine Art, University College, London, on 5 January 1881. He spent four terms spread over three years under Alphonse Legros, an emigré Frenchman who emphasized draughtsmanship and memory training, then some eighteen months in Paris under Fernand Cormon. For some seven years he studied painting as it suited him, restless and unsettled, constantly breaking the routine for painting tours and holidays. He visited Spain in 1883 with Tom Roberts and Dr William Maloney, lifelong friends; another trip was to Sicily in 1887. In Paris on 8 February 1888 he married Auguste Rodin's beautiful Italian model Marianna Antoinetta Mattiocco. That year he settled at Belle Ile, off the coast of Britanny, and built Le Chateau Anglais.

Well-built and athletic, with a preference for rowing, boxing and sailing, Russell was warm-hearted: friendships were of the greatest importance to him. He keenly felt Roberts's return to Australia in 1885, while in Paris his friendship with van Gogh (whom he had met at Cormon's) is commemorated by his fine portrait-study now at the Rijksmuseum Vincent van Gogh, Amsterdam. His meeting with Claude Monet on Belle Ile in 1886 was of the greatest importance to his style of painting and Auguste Rodin was to become a well-loved family friend.

From early beginnings in portraiture and subject painting, Russell developed into a fine seascapist, landscapist and painter of la vie intime—studies of family life. He is noted above all as a colourist and had an extensive knowledge of colours and their properties, grinding them himself on Belle Ile to obtain maximum purity. He exhibited rarely and disliked the artistic competition in London and Paris. Nevertheless he left Belle Ile after Marianna's death in 1908, returned to Paris, then travelled with his daughter Jeanne, a singer, through southern France, settling for a time at Portofino, Italy. In Paris on 17 June 1912 he married Caroline de Witt Merrill, an American singer known as 'Felize Medori'. World War I drew Russell back in 1915 to England where his five sons had joined the allied forces.

After the war Russell settled his fourth son Siward on the land in New Zealand. He painted numerous watercolours during his two-year stay in New Zealand before settling at Watsons Bay, Sydney, where he often painted harbour scenes from his boat. He died at Randwick on 22 April 1930 of a heart attack brought on by lifting rocks to make a harbour for his second-greatest passion, sailing boats. He was cremated with Anglican rites. His wife and their son, and six children of his first marriage survived him and inherited his estate, valued for probate at £41,973.

After Russell's death his reputation fell into oblivion, despite the efforts of his cousin Thea Proctor. His daughter bequeathed twenty-one of his oils to the Louvre, now in the Musée Rodin, Paris. He is now represented in the main Australian galleries, although they were slow to collect his work.