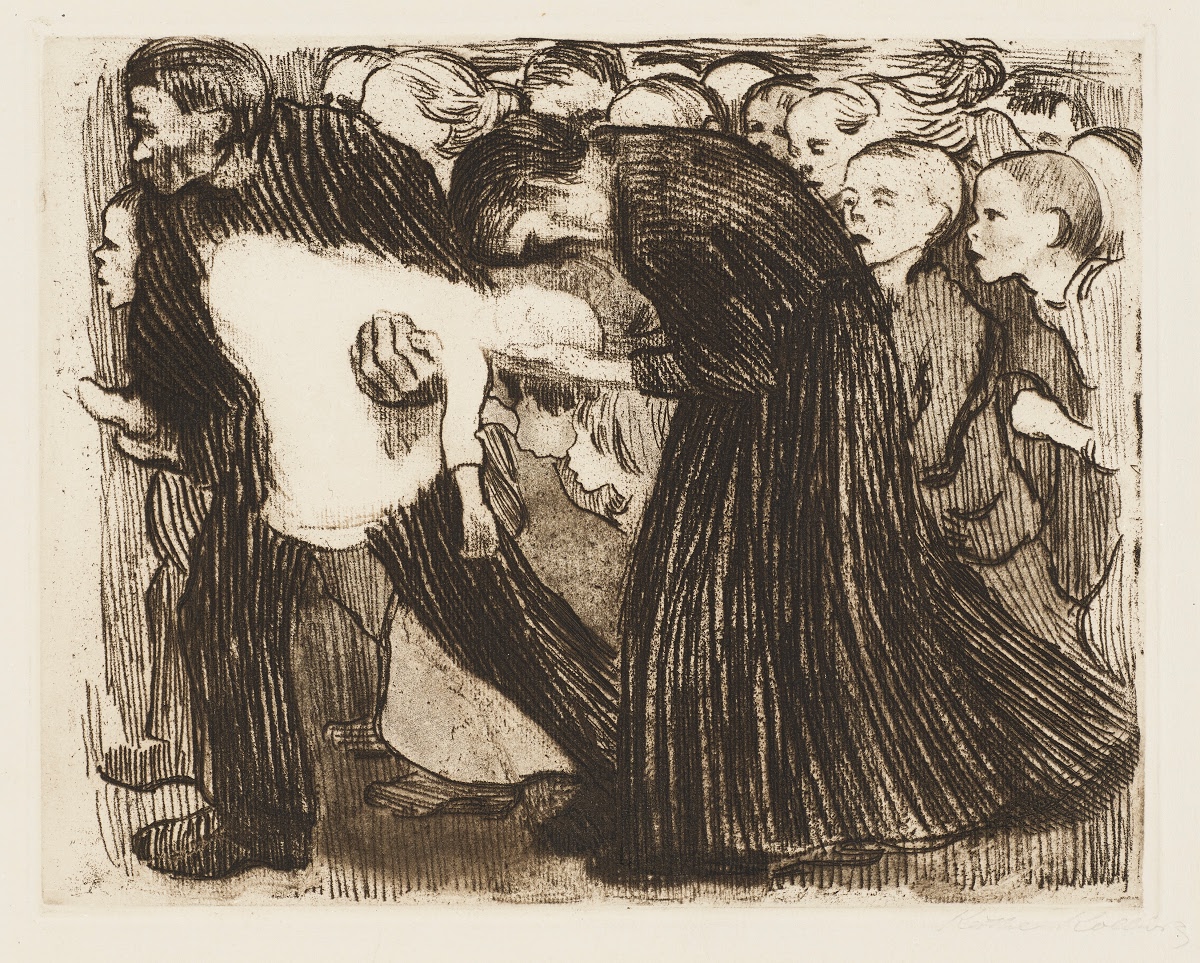 Born in the Prussian city of Königsberg (now Kaliningrad, Russia) in 1867, Käthe Kollwitz established herself in an art world dominated by men by developing an aesthetic vision centered on women and the working class. Her representations of women, including her frequent self-portraits, effectively communicated her subjects’ predicaments during a period when women were still negotiating ways to represent themselves in the arts. While her naturalistic style appeared out of touch in an era that witnessed the birth of abstraction, her depictions of universal human experiences, given depth and emotional power through her dense networks of lines and light and dark contrasts, were also reflective of her time. The loss of her son during World War I, for instance, led to a lifelong exploration of the subject of mourning. She also found many of her motifs in her husband’s medical clinic for workers and people in need, where she also kept her studio.

Initially trained as a painter, Kollwitz began to focus on the graphic arts after she encountered the work and writings of fellow artist Max Klinger, who defended the exacting art of drawing over the free form of painting. After 1890, she gave up painting in favor of etching and sculpture, and later turned to lithography and woodcuts. Moving from one technique to another, she increasingly simplified her visual language over time, but never at the expense of legibility. The detailed quality of drawing matched her concerns with depicting the stark reality of war and its victims. In a woodcut titled The Widow II (Die Witwe II), from her 1921–22 print cycle War, Kollwitz depicts the body of a distressed mother lying flat on the ground. The mother holds her limp child, and both appear as if they are dead. The ease of distribution and accessibility of prints such as these appealed to the artist’s sense of advocacy. Writing in her diary, Kollwitz declared, “I felt that I have no right to withdraw from the responsibility of being an advocate. It is my duty to voice the sufferings of men, the never-ending sufferings heaped mountain-high. This is my task, but it is not an easy one to fulfil [sic].”1

Kollwitz’s compassion for those in need has bestowed on her continued international renown. Today, her name evokes images of bereaved mothers, ailing, fatherless children, anguished parents, and, more generally, suffering and death. However, her reputation, while largely defined by its socially critical subject matter, also rests on her artistic talent and drive for experimentation in a wide range of mediums. Kollwitz often mixed various printing techniques to achieve a desired image. Even though the majority of her prints are black-and-white, a significant number of them reveal an interest in color that reflects her beginnings, when she was studying to be a painter.