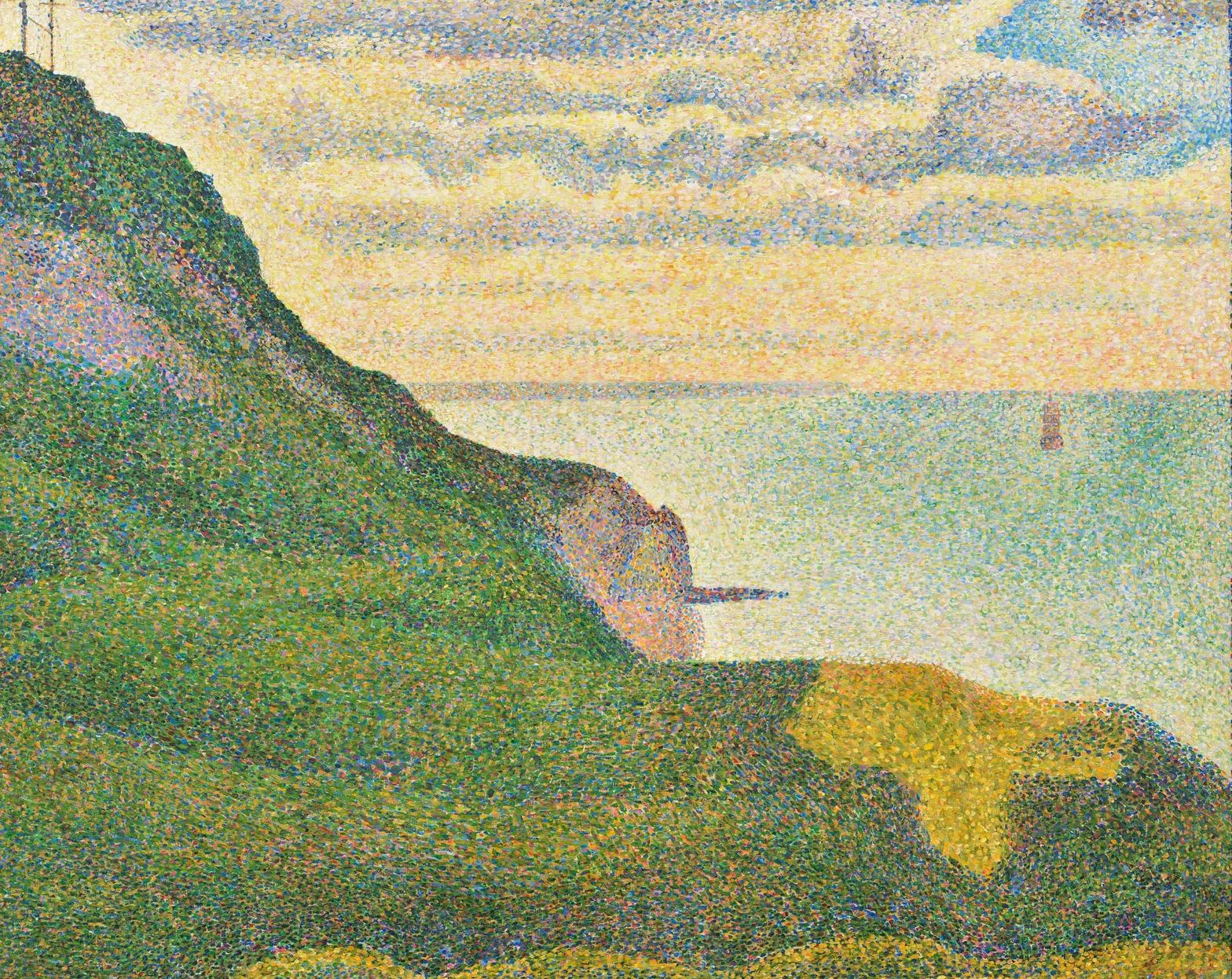 Neo-Impressionism is a term applied to an avant-garde art movement that flourished principally in France from 1886 to 1906. Led by the example of Georges Seurat, artists of the Neo-Impressionist circle renounced the random spontaneity of Impressionism in favor of a measured painting technique grounded in science and the study of optics. Encouraged by contemporary writing on color theory—the treatises of Charles Henry, Eugène Chevreul, and Odgen Rood for example—Neo-Impressionists came to believe that separate touches of interwoven pigment result in a greater vibrancy of color in the observer’s eye than is achieved by the conventional mixing of pigments on the palette. Known as mélange optique (optical mixture), this meticulous paint application would, they felt, realize a pulsating shimmer of light on the canvas. In the words of the artist Paul Signac, Neo-Impressionism’s greatest propagandist, “the separated elements will be reconstituted into brilliantly colored lights.” The separation of color through individual strokes of pigment came to be known as Divisionism, while the application of precise dots of paint came to be called Pointillism.

The art critic Félix Fénéon first used the term Neo-Impressionism to describe the paintings of Georges Seurat, Paul Signac, Camille Pissarro, and his son Lucien Pissarro, at the eighth and last Impressionist exhibition in Paris in 1886. Seurat debuted his masterpiece A Sunday on La Grande Jatte, a virtual manifesto for the Neo-Impressionist technique. His manner of weaving and layering small brushstrokes indeed achieved a tapestry-like paint surface of complementary and contrasting hues. Even Vincent van Gogh admired Seurat’s expansive palette, noting on a visit to Seurat’s studio the “fresh revelation of color.”

Neo-Impressionism cast its allure far and wide, traversing generations and national boundaries. Camille Pissarro was among the first to embrace Seurat’s system of color harmony, recognizing it as “a new phase in the logical march of Impressionism.” In Belgium, where French Neo-Impressionism debuted at the exhibition of Les XX in 1887, Theo van Rysselberghe adopted Seurat’s idiosyncratic technique, as did other avant-garde artists. Some years later, even Henri Matisse tipped his hat to Neo-Impressionism when he joined Paul Signac and Henri-Edmond Cross in Saint-Tropez in the summer of 1904, and painted Luxe, calme et volupté, an imaginary figural landscape painted in divided brush marks of glowing color.

Were it not for Paul Signac, Neo-Impressionism might have lost all momentum following the early death of Seurat in 1891. Signac inherited the Divisionist banner and lobbied tirelessly on its behalf. It was Signac who introduced Seurat’s system of color harmony to the vanguard critics and writers who would champion it, and it was he who published the influential treatise D’Eugène Delacroix au Néo-Impressionnisme (1899), an argument for Neo-Impressionism as the logical and legitimate successor to Impressionism. In Signac’s own work, the rigor and restraint of his early paintings gave way to a bold and luxuriant palette in later years (Entrance to the Grand Canal, Venice, Toledo Museum of Art, 1952.78). His marine watercolors , in particular, enabled him to explore the purity and clarity of color, with no more than a pencil and a box of watercolors in his itinerant pocket.

If Neo-Impressionism ultimately marked only a brief passage from the plein-air painting of Impressionism in the nineteenth century to radiant Fauvism and the geometry of Cubism in the twentieth, it codified a language essential to modernism and brought with it a new text of independent form and color.